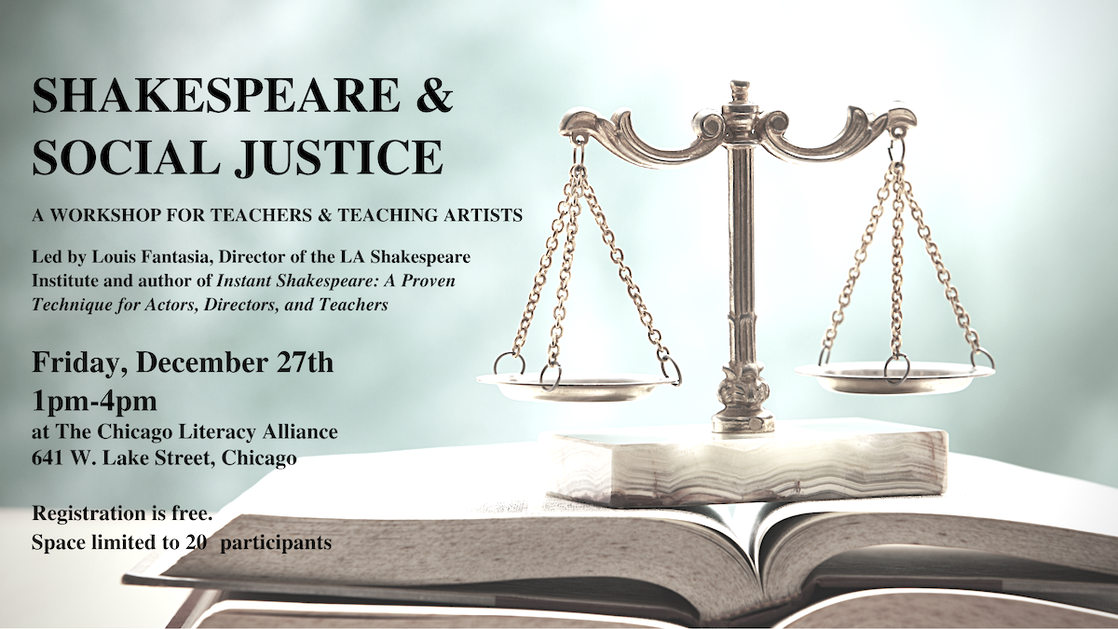 When Shakespeare is “used” to teach or explore concepts of social justice (especially in productions or in the classroom), the texts generally employed seem to be the ones that attach themselves directly to social issues. For example, these include gender issues and The Taming of the Shrew; race and Othello; bigotry and The Merchant of Venice; imperialism and The Tempest, and so forth.

While I myself have engaged in this type of analysis and discussion[1], I now believe that this kind match-making of text-to-issue not only limits Shakespeare, but also limits the related social issues. I am coming to believe that the essence and key to Shakespeare’s social justice world view is in King Lear’s Act III speech, in a storm, on a heath:

Poor naked wretches, wheresoe’er you are,
That bide the pelting of this pitiless storm,
How shall your houseless heads and unfed sides,
Your looped and windowed raggedness defend you
From seasons such as these? O, I have ta’en
Too little care of this. Take physic, pomp.
Expose thyself to feel what wretches feel,
That thou may’st shake the superflux to them
And show the heavens more just.
(King Lear, 3.4.32-41)

What Shakespeare is advocating here is that we “feel what wretches feel,” that we develop a sense of empathy as the basis for justice. As I have written elsewhere, “this [is the] moment Lear steps into the boxcar heading for Treblinka, joins the refugee camps in Darfur, and wades into the flooded streets of New Orleans. In short, he invents his own humanity...”[2] Shakespeare’s empathy came, in large part, from his humanist, classical, grammar school education. As Michael Dobson put it, “Shakespeare’s defining gift is empathy: each of his characters, whether pagan or Christian, man or woman, English or Moorish or the illegitimate child of an Algerian witch, gets to speak in his or her own right.” [3]
In this upcoming workshop, we will explore Shakespeare’s passion and ability to get his characters (and encourage his readers and audiences!) to speak in their own right. We will, of course, also investigate those villains of Shakespeare’s – Iago, Richard III and the Macbeths, for example - who lack this empathetic “milk of human kindness.”
- Louis Fantasia
​
[1] Fantasia, Louis. “Oh, Brave New Will: Images of Justice and Intolerance in Shakespeare.”  Talking Shakespeare: Notes from a Journey. Peter Lang Publishers. NY, 2017. Pp.11-23
[2] Fantasia, Louis. “King Lear or Survivor?”. Tragedy in the Age of Oprah: essays on five great plays.” Scarecrow Press, Lanham, MD. 2014. P.68 (also here: https://billmoyers.com/2014/08/04/king-lear-or-survivor/)
[3] timesofmalta.com/articles/view/Shakespeare-s-defining-gift-empathy.612149
Participant Resources:

Louis Fantasia has produced and directed more than two hundred plays and operas worldwide. He is currently Artistic Associate at the Shakespeare Center of Los Angeles, and Director of the SCLA/UCLA Clark Memorial Library Shakespeare Institute. His book, Instant Shakespeare, was published in the U.S. by Ivan R. Dee and by A & C Black in England. Tragedy in the Age of Oprah, his second book, was published by Scarecrow Press.  His new book, Talking Shakespeare: Notes from a Journey, was published in 2017 by Peter Lang Publishers. In 2014, 2016 and 2018 he directed the gala performances of Britweek’s 450th Shakespeare Birthday Celebration, the 400th Anniversary of Shakespeare’s Death, and the 250th anniversary of the founding of the Shakespeare Jubilee in Stratford, England.

Formerly Dean of the Faculty at the New York Film Academy’s Los Angeles campus, Louis also served as President of Deep Springs College. He has also been a panelist on education and cross-cultural development at both the Beijing and Shanghai Film Festivals, and has lectured and given workshops at the Beijing Film Academy, the Shanghai Theatre Academy, Juilliard and other international drama schools. The Los Angeles Reader called Louis Fantasia "one of L.A.'s finest directors."

In 2003, the Council of Europe named the theatre collection at its library in the European Parliament in honor of Louis Fantasia, who holds both U.S. and European Union passports. In 2016 he was awarded the Officer’s Cross of the Order of Merit of the Federal Republic of Germany for his contributions to German culture and theatre.  ​​